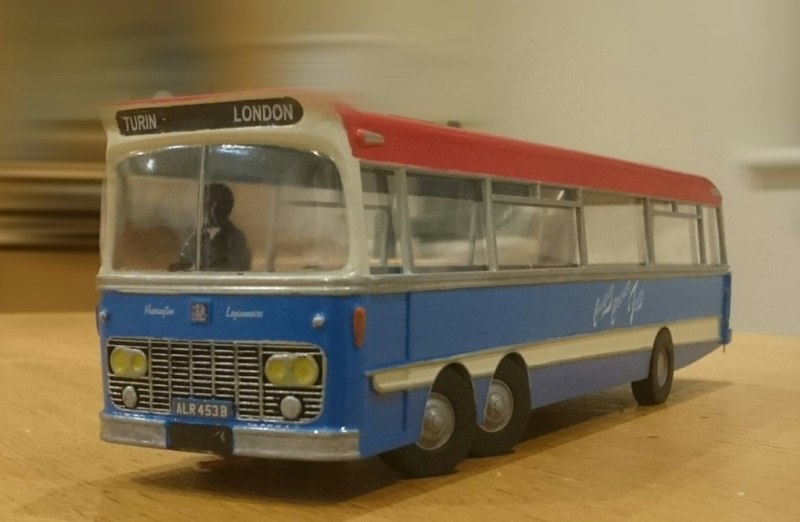 Say you were planning an ambitious gold heist, you’d need a cunning plan to steal the gold but really the clever bit is to plan the getaway.  Small, nimble cars would be ideal to get the gold out of the city but you would want to transfer it to a larger vehicle for your escape.  All the better if you didn’t have to park somewhere to do the transfer which would mean some fiendish way of loading. 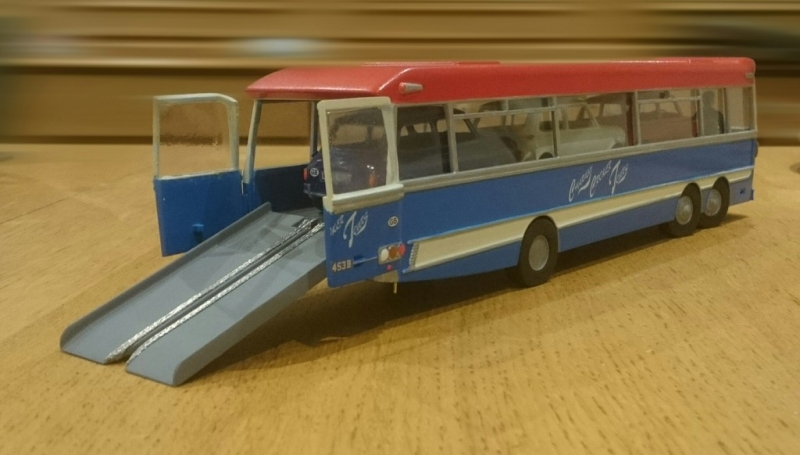 To get it to fit on a Scalextric track and still fit 3 Minis makes it a big vehicle, 340mm long and almost 80mm wide.  The structure is a 3D printed bodyshell with removable floor, this accommodates the steering systems, motor pod and of course give somewhere for the Minis to ride.

The reason for the two front axles on the Harrington Legionnaire was one of pure penny-pinching. With the introduction of 36′ coaches in the UK, Bedford wanted a piece of the action but found it did not have a front axle of a heavy enough capacity in its TK range. Of course any other manufacturer would just engineer a heavier axle but Bedford only used components shared with its truck range to gain as much economy of scale as possible.

The answer was a simple one: by using three axles, no new axles would have to be created just for this one model. Initially twin rear axles were considered but tyre scrub was thought to be a big turn off for operators. Twin front axles were settled on using the axles from the TK with 16″ wheels and the first petrol powered chassis was completed (unofficially named lash up no.1) It was bodied by Duple with an elongated Vega style body and tested at Chaul End, Luton, to the point of destruction.  This was before the test facility at Millbrook was opened in 1968! The body was still good and was transferred to a production chassis later on.

The front leaf springs were individually rated to give the best ride possible as Bedford did have a knack of good steel suspension design. The chassis had some interesting quirks. A blow out on one of the front axles did not severely affect the steering so it could be brought to a controlled stop with ease and this feature was demonstrated on film. The chassis also had two separate handbrakes. One was a transmission brake mounted on the input of the diff and another lever operated the brakes on the rear of the two front axles.

It was the first Bedford to be fitted from the factory with power steering. When launched, as Bedford didn’t produce a powerful enough Diesel engine, the Leyland 0350 was offered as the diesel option. This was different to the regular Leyland unit as the head was redesigned so that inlet and exhaust was on the same side of the engine. Eventually Bedford produced the 466ci engine and the Leyland option was dropped.

Initially finding favour with operators due to the extra axle and small wheels giving the impression of grater length so a VAL was seen by the public as futuristic and modern even though the design was somewhat of a compromise. After a few years the decision to use the lighter axles and small wheels was repaid by big problems with brake wear and balance and the steering geometry was fickle to eliminate high tyre wear in the faster wearing front tyres and the chassis quickly fell out of favour with operators. The brake wear problem was slightly helped with the introduction as an option of a Telma electric retarder and this was specified or retrofitted to many chassis.

The original reason for the six wheel layout was removed after a couple of years as a heavier axle was needed and indeed designed for the heavier weight TK models and so was available for bus and coach use. The Bedford VAM was designed using two axles and could be seen as the VALs replacement however the VAL carried on being sold until around 1973.